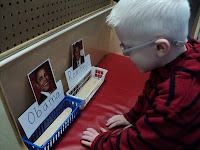 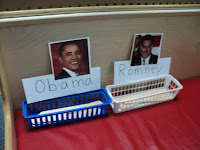 Today our class held a mock election.  During one of our “Let’s Talk About It” discussions, many of our friends knew who Obama, Romney, Warren, and Brown were.  They talked about all the TV commercials they saw. We decided to have our own class election. We have 2 baskets, one for each candidate.  Then we used popsicle sticks to cast our vote.  Each child went to the “secret” poll and put their stick into the basket of there choice. Then we use 1:1 correspondence to count our results.  We then discussed which had more and which had less. 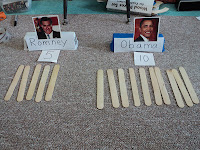 Here are our results:


We think the next president will be Barack Obama 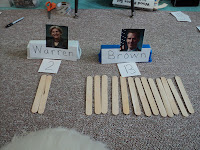 We think the next senator will be Scott Brown.


It was a fun and exciting process to have a class election.
We are excited to see if our election will be the same or different from tomorrows election.
Posted by Lisa at Monday, November 05, 2012